Freedom Boat Club was first founded in 1989 in Sarasota, FL. It is the oldest and largest boat club in the nation. The vision and purpose in establishing the boat club model was simple and straightforward … to provide an affordable option to boat ownership and to deliver a hassle-free recreational boating experience for its members.

At the time, the concept was considered revolutionary and break-through. Boaters were either traditional boat owners, or friends of boat owners. There weren’t boat clubs, fractional boating, boating timeshare, or even many boat rental facilities. The exclusive fraternity of boat owners stored their vessels at marinas, home docks or at the yacht club. When Freedom Boat Club launched, this new offering presented an exciting new alternative that opened the waterways to newcomers as well as lapsed boaters.

As the organization began its initial growth, Freedom Boat Club was sold to an investment group. Over time, it became evident that the best leadership for this type of business model would require active engagement at the helm. John Giglio and Robert Daly had both been working for the investment operator, and negotiated to buy the enterprise in 2011. Mr. Giglio bought Mr. Daly out in 2012 and became the sole President.

While the original mission has fundamentally remained the same, the composition and scope of Freedom Boat Club is continually expanding.

Today, Freedom Boat Club welcomes and embraces a broad mix of members to its ranks, from first-time boaters and newbies, to seasoned salts and former boat owners, from young families to active retired. Freedom Boat Club is also actively engaged in developing new and diverse markets. Anyone who loves the water and water-related activities is embraced as a member of Freedom Boat Club! 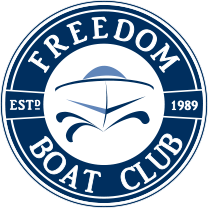 Exhibited At:
St. Petersburg Power & Sailboat Show - 2021
Category:
Products
Finance/Insurance/Documentation
Associations & Clubs
We use cookies to help provide you with the best possible online experience. Please read our Privacy Policy and Cookie Policy for information about which cookies we use and what information we collect on our site. By continuing to use this site, you agree that we may store and access cookies on your device.
I Agree