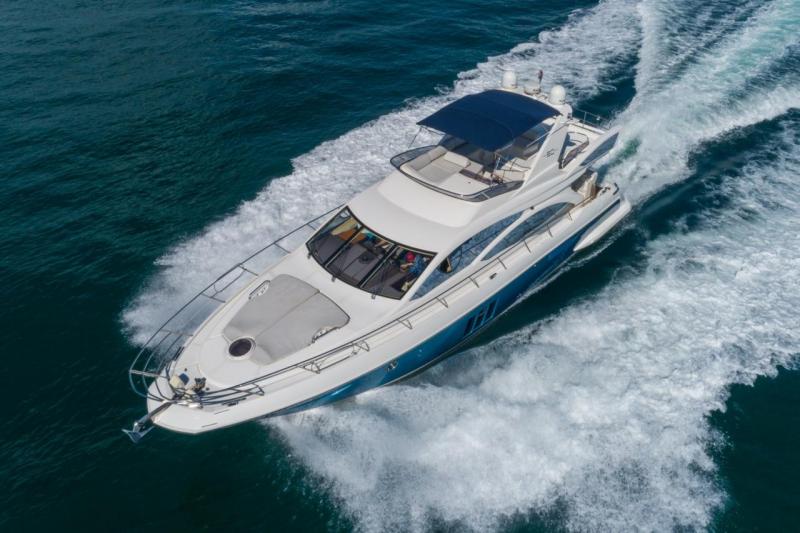 Perhaps Mamma shouldn’t be told, but everyone else should be aware that the 2010 60′ Azimut DON’T TELL MAMMA is on the market and ready-to-be-sold. She has the type of extremely sophisticated yet supremely comfortable European-style interior for which Azimuts are famed.

One recurring theme on the yacht is music & entertainment. There are only a handful of vessels in her class with as many high-end speakers on board as DON’T TELL MAMMA – even on the bow, where they are perfectly positioned to provide musical accompaniment while sunpad lounging.

Powered by recently-serviced MAN R6s with low engine hours, this three-stateroom yacht is in good condition and runs well. This is no surprise, as she has been well-looked after and has had recent, significant work performed on her – including a complete wax job, teak refurbishment, new Raymarine monitors, bilge cleaning, Bimini Top cleaning, and VHF radio replacement. One of her A/C compressors was just replaced, and the other is less than a year old, so the entire vessel can be brought down to downright chilly conditions (if one were so inclined).

Unlike some of her direct comps, DON’T TELL MAMMA also boasts a crew berth with a head, which is accessible off the transom. This doesn’t make her any less of an ideal owner-operator yacht, but it certainly opens up the options.

For anyone looking for a great Bahamas boat in the 55′ to 70′ range or a turn-key charter yacht – one that is capable of both day & term charters – look no further than DON’T TELL MAMMA.

Category:
Inboard
Motor Yacht
View this product at 26northyachts.com
Boat Info
Make
Azimut
Model
Model Year
2010
Boat Type
Accommodations
6
Construction
Classification
Price
Name
DON'T TELL MOMMA
Engines
2 x MAN R6
Fuel
Length
60
Boat Dimensions
LOA
LWL
Beam
16' 3
Minimum Draft
4' 7
Maximum Draft
MFG Length
60
Boat Performance
Cruising Speed
Maximum Speed
32 Knots
We use cookies to help provide you with the best possible online experience. Please read our Privacy Policy and Cookie Policy for information about which cookies we use and what information we collect on our site. By continuing to use this site, you agree that we may store and access cookies on your device.
I Agree