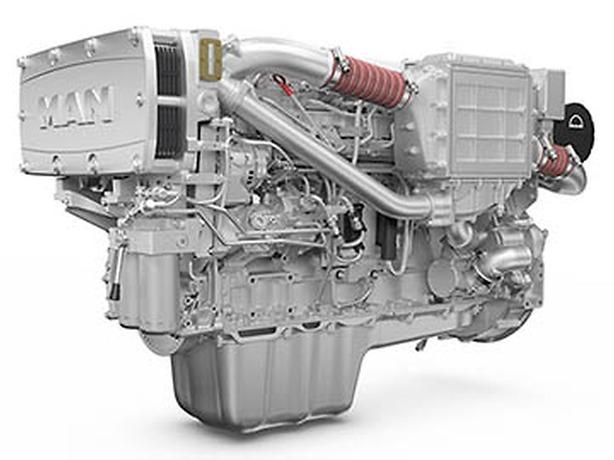 At the end of 2015, MAN Engines presented the D2676 as an innovation for workboats in the USA. Since May 2015, two field trial engines have already been running on Lake Constance in the catamaran Constanze and are providing excellent results after one year. In spite of their significantly reduced displacement compared to the predecessor, the performance and dynamics have remained consistently positive. Significant fuel savings are the consequence of the modern engine concept and the smaller number of cylinders, among other factors. Through a technological leap in consumption optimisation and higher average pressures thanks to common rail injection, the engineers at the MAN Engine Competence Centre in Nuremberg were able to optimise consumption: at the best point it is now a mere 188 g/kWh. The catamaran Constanze needs eleven percent less diesel with the D2676 than with the previous drive unit. “In addition to the new engine, we have carried out other projects with a view to saving on fuel. In spite of the reduction in the ship’s resistance, the structure of the off-flow and the overhaul of the rudder, we can assume that the majority of the savings are linked to the engine”, says Christoph Witte, Managing Director of Katamaran-Reederei. More than 15 percent was already saved last year due to an altered route. It enabled lower maximum speeds on the lake with the same timetable. “As is well known, the shortest path connecting two points is a straight line, which we have come slightly closer to achieving with the new route”, says Witte. Now a speed of 17.3 knots (32 km/h) is sufficient for the catamarans, instead of 21.6 knots (40 km/h), in order to cross the lake at 60-minute intervals. Due to the lower speed, the catamarans again use less diesel.

Category:
Engines/AC/Maintenance
Engine Accessories
Engine Controls & Instruments
Engine Maintenance
Outboard Motors
View this product at engines.man.eu
We use cookies to help provide you with the best possible online experience. Please read our Privacy Policy and Cookie Policy for information about which cookies we use and what information we collect on our site. By continuing to use this site, you agree that we may store and access cookies on your device.
I Agree