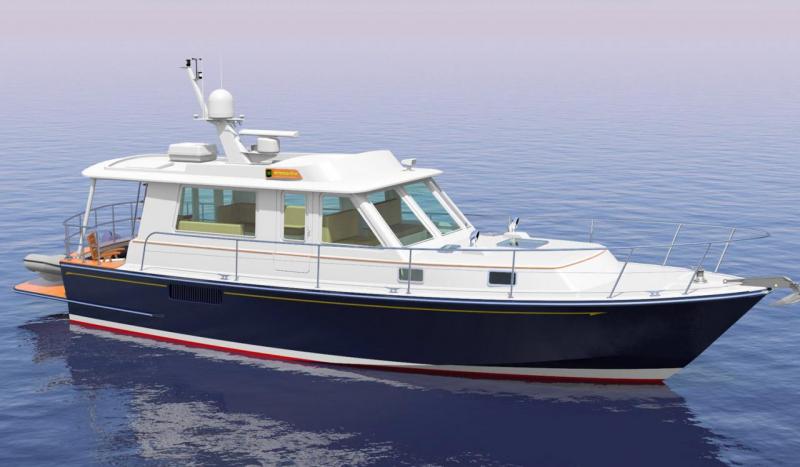 While most applications of the Hunt V-hull use twin engines to take advantage of the comfortable Hunt high speed ride, there are other possibilities for modest speed and good fuel economy which are sometimes neglected.  Depicted here is a 42- foot cruiser with a single 300hp engine driving a propeller partially housed in a tunnel.  Full planing speed will be about eighteen knots, and fuel consumption a touch more than one nautical mile per gallon. At maximum displacement speed, eight knots, she will return some 2 nmpg. The use of a single engine not only halves the weight of the propulsion package, but it reduces the weight of fuel to be carried, and lighter weight means greater efficiency, earlier planing, and a less pronounced “hump angle” when in a semi-planing mode. Other benefits result from the use of a propeller tunnel; reduced draft, lower and more efficient shaft angle, and quieter operation. The V hull with chine flats and lift strips runs straighter and drier than a round-bilged hull, and is less inclined to roll, both under way and at rest.  Running at semi-planing speeds, the hard chine hull has the advantage of crisper water separation and reduced resistance.

Category:
Express Cruiser
Sport Cruiser
Cruiser
Yacht Builders
View this product at lymanmorse.com
We use cookies to help provide you with the best possible online experience. Please read our Privacy Policy and Cookie Policy for information about which cookies we use and what information we collect on our site. By continuing to use this site, you agree that we may store and access cookies on your device.
I Agree