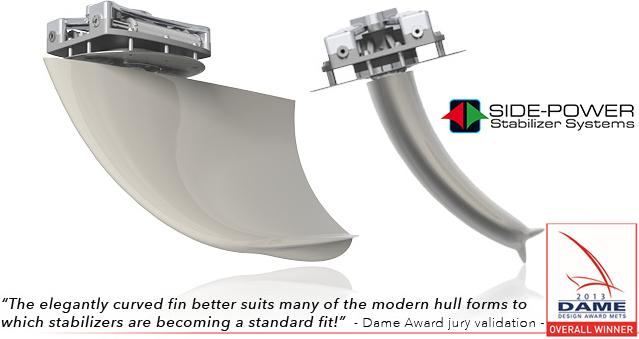 Introducing a revolutionary generation of boat fin stabilizers Only a fin stabilizer system can handle both cruising and at-anchor well. On a typical fin stabilizer system optimized for at-anchor stabilization, the fin size is larger than the fin used for underway only. Larger fins provide more stabilization force, but also create more drag which equals higher fuel consumption, especially at higher speeds, an important point for most boat owners. Larger fins also means that the internal components grow in size, making it difficult to install them in an optimal position. Some stabilizers end up with negative side-effects like causing yaw (steering effects) and sway (side-ways movements). These side effects force owners and designers to compromise stabilization for efficiency. With the introduction of the Vector Fin™ and Side-Power's range of compact actuators, there is no need to compromise. Now you can have it all; speed, efficiency and a stable boat.