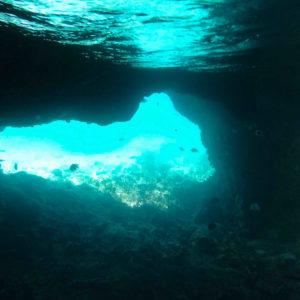 Visit this natural wonder made famous by various James Bond films, including its namesake, and others. Dive and snorkel your way around this awe-inspiring underwater cave system. A Hidden World Awaits Located next to Staniel Cay, this fantastic sight is great for snorkeling, diving, and wading around the warm waters of the Bahamas. It is teeming with exotic marine life and a kaleidoscope of brilliantly colored coral reefs and fish, including vibrant yellow-tail snappers, huge blue and gold Angelfish. Enter the grotto via a small hidden entrance that’s completely submerged during high tide. We supply all the snorkeling equipment necessary so you can experience this unbelievably beautiful locale. The grotto is actually a naturally occurring limestone cave situated on the western coast of Staniel Cay. It’s a short boat ride and usually the first stop on the Day Tour if the tides are low. The grotto got its name from the 1965 James Bond film “Thunderball”. The underwater scenes were filmed here and the cast and crew frequented the Staniel Cay Yacht Club. There are a few pictures hanging in the club of the crew lounging after a long day in the Bahamian sun shooting the film. The grotto was also used much later in the series for the James Bond film, “Never Say Never Again”. Sean Connery once again playing the part of James Bond for his seventh and final time.

Category:
Products
Destinations/Marinas
Destinations & Resorts
Jet Charter
View this product at stanielair.com
We use cookies to help provide you with the best possible online experience. Please read our Privacy Policy and Cookie Policy for information about which cookies we use and what information we collect on our site. By continuing to use this site, you agree that we may store and access cookies on your device.
I Agree